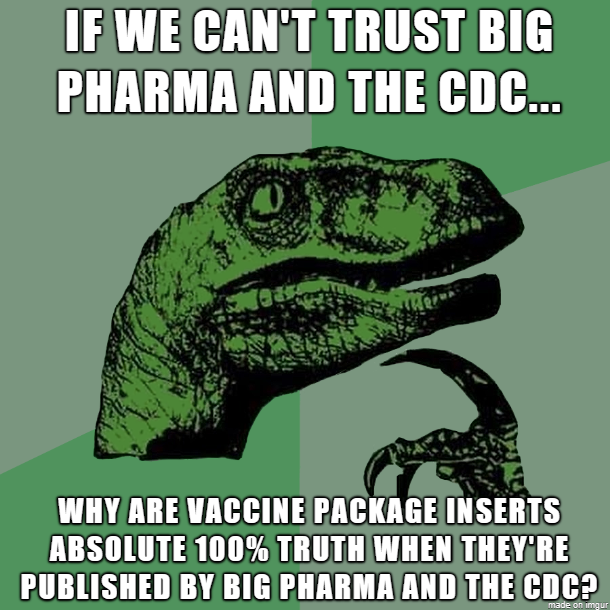 Anti-vaccine advocates often like to make arguments based on information contained in vaccine package inserts.  If people would read what is in package inserts, they say, nobody would ever get vaccinated!

Well, let’s take a look at what is in one of those package inserts.  Granted, most people don’t read them, mainly because they aren’t terribly interesting, but anti-vaccine advocates, although they do read them, clearly don’t understand them very well.

First of all, it is important to understand that vaccine package inserts are not scientific documents.  They are legal documents that contain certain information that is legally required to be included with any medication, and typically use boilerplate language.  As a result, the information that they contain, while accurate, can be misunderstood by those who are highly motivated to misunderstand them.  Secondly, anti-vaccine advocates seem never to grasp the irony of them claiming that Big Pharma is trying to hide the dangers of vaccines, but that these supposed dangers are to be prominently found in the very package inserts written by Big Pharma.

But, then, anti-vaccine advocates don’t have a reputation for being logical.

This vaccine uses a live virus!  It’s going to infect me!

Many anti-vaccine advocates think that this is a red flag.  Since the MMR contains a live virus, they claim, it can be “shed” to others and cause outbreaks of the very diseases they are intended to prevent.

This claim, however, has no basis in reality.  While the virus is live, it is attenuated, meaning that it is very nearly dead before being injected.  The virus is essentially in hospice, awaiting for your body’s immune system to finish the job.

The insert says that there’s human DNA in vaccines!

Viruses need cells to live and to reproduce.  Therefore, when vaccines are created, the viruses need to have a host.  Sometimes those are chick embryos, and sometimes, as is the case of the rubella virus in the package insert we’re looking at here, they are in human cells.  The insert for MMR says about rubella, “the Wistar RA 27/3 strain of live attenuated rubella virus propagated in WI-38 human diploid lung fibroblasts.”

Still, the anti-vaccine advocates say, removal can still leave taces of human DNA in the vaccine, and that human DNA gets directly injected into you!  The simple reply to that is, so what?  Anti-vaccine advocates seem to think that DNA being injected is going to alter their own DNA.  This, however, is not only not possible, but it doesn’t even make a shred of sense.  You get foreign DNA inside of you on a regular basis.  Every time you eat food, or get stung by a mosquito, or scratch your skin, you get foreign DNA inside of you, and it doesn’t cause any issues.

But you know what does modify your DNA?  The very viruses we are vaccinating against.

But these diseases are harmless!

Anti-vaccine advocates point to the verbiage, “Measles, mumps, and rubella are three common childhood diseases,” to claim that the diseases are harmless.  If they’re common, so they say, then they can’t be all that bad!  Many of them will regale listeners with stories of how they had measles as a child and suffered no serious effects.  But they ignore the very next sentence of the insert that says that these diseases, “may be associated with serious complications and/or death.”  In fact, measles alone, before the introduction of the vaccine, caused approximately 400-500 deaths per year in the United States alone.  Still today, measles causes over 100,000 deaths per year worldwide.

Looks like vaccines work!  Good thing we read the insert!

Look at all those side effects!

When vaccines undergo clinical testing, any adverse event reported during testing must be included in the package insert.  The anti-vaccine advocates try to use this as evidence of how dangerous vaccines are, but they routinely fail to understand a very important point — the term “adverse event” means that there is not necessarily a causal link between the vaccine and the event.  In other words, if someone is administered the vaccine, then hours later injures themselves in a skateboarding accident, the accident is reported as an “adverse event,” but it is of course ridiculous to claim that the vaccine caused it.

But that is precisely what anti-vaccine advocates try to do.

The ingredients are toxic!

Every vaccine is different, but some contain scary-sounding chemicals such as formaldehyde, aluminum hydroxide, or mercury.  However, anti-vaccine advocates overlook a couple of very important things when pointing out these ingredients.  One, we are exposed to most of these chemicals on a daily basis, and in amounts far greater than is contained in any vaccine.  For example, a pear can contain as much as 10 milligrams of formaldehyde, compared to approximately 0.25 milligrams that might be found in a vaccine.

In addition, the human body naturally produces over an ounce of formaldehyde naturally every day.  That is approximately 40,000 milligrams.  Clearly, the tiny amount in a vaccine is trivial compared to that.

The other thing anti-vaccine advocates overlook is that there really is no such thing as “toxins,” as they like to describe them.  As far back as Paracelsus in the 16th century, it has been known that literaly everything is poisonous, if in sufficient doses.  It is, in fact, possible to die of poisoning from drinking too much water.  Conversely, the amounts of various chemicals such as thimerosal (which dissociates into ethylmercury, the far less toxic cousin of methylmercury) are far too small in a vaccine to cause any harm.

Anti-vaccine advocates may have read the inserts, but almost without fail, they don’t understand them.