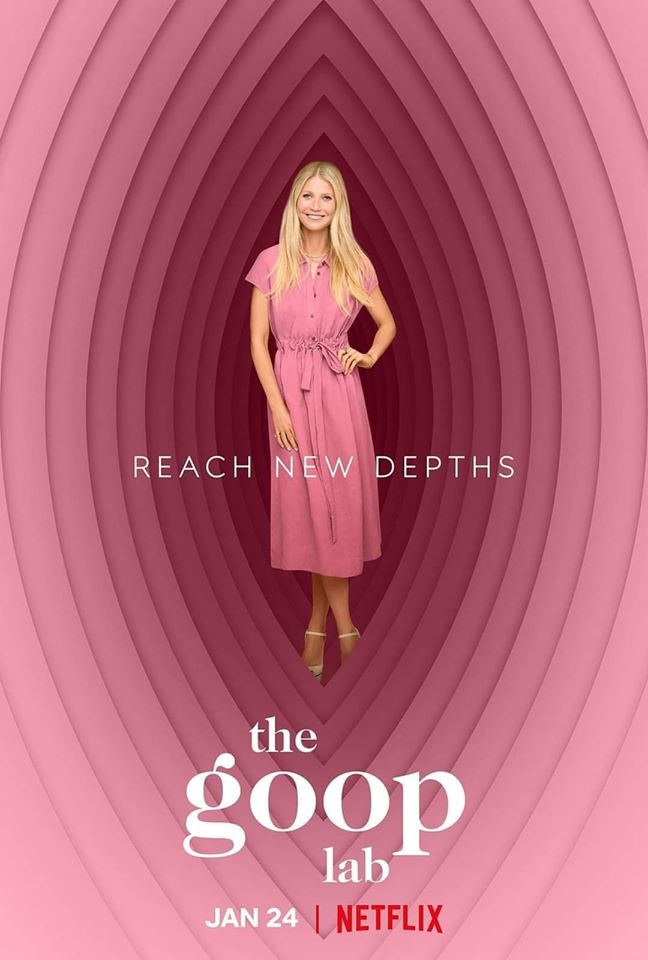 “When I started Goop in 2008, I was like, ‘my calling is something else besides, you know, making out with Matt Damon on screen.’”  Gwyneth begins the first episode before any introduction music or titles, earning a chuckle from those assembled over the plight of the poor little rich white chick who has started a business venture that has separated fools from their money going on twelve years now.

She continues with platitudes in true Goop fashion:  Optimization of self.  We’re here one time.  One life.

Then she continues with her most self-aware statement yet – “how can we really milk the shit out of this?”  Yes, they sure are. And thus begins the new Netflix series, The Goop Lab. Oh, wait, sorry.  “the goop lab,” because lowercase letters make all the difference.

We finish the introduction with the standard “please don’t sue me” legalese stating that “the following series is designed to entertain and inform – not provide medical advice.”  Well, let’s see how entertaining and informative the episode is, shall we?

Now we get to hear what the episode is all about.  It would seem we are going to hear about psychedelics.  Trippy.  Of course, they immediately throw in the phrase “we try to be open-minded” at the idea that they might just be peddling snake oil and that people should “make up their own minds.”  Whenever someone tells you to be “open-minded” and “make up your own mind,” what they are really telling you is, “believe our bullshit.”

I’m only two minutes into this episode and I’m already drowning in bullshit.

The next minute is full of people basically describing their acid trips.  My fave was “time and space around me had dissipated.”  Yup.  The clinical term for that is “tripping balls.”

Now we begin the show proper.  On screen is Mark Haden, Executive Director of Canada’s Multidisciplinary Association for Psychedelic Studies (MAPS) and Dr. Will Siu, of whom they only say “psychiatrist.”  Of course, they stress all the “terrible side effects” of current drugs used in psychiatry today, yet don’t mention that psychedelic drugs also can have some dreadful side effects.  MDMA (better known as ecstasy), for example, has caused numerous deaths1, yet it is one of the many drugs being researched for its potential in psychiatric patients.

For the episode, the Goop staff traveled to Jamaica to use psilocybin under very close medical supervision that entailed sitting on a carpet under a tree while being monitored by “psychedelic elders” whose mere presence could supply enough white bread to keep a large Subway running for an entire year.  No actual medical or clinical credentials of the elders was ever shown, and I would wager don’t exist.

Before taking the psilocybin, they go around the circle explaining why they’re here (besides, of course, being paid to do so).  The first one to go says she wants to “understand myself in the context of the bigger universe.”  Whatever the hell that means.  She might as well have gone on to say that her chakra frequencies had been misaligned.

“Anything that happens is perfect,” responds Guru Whitey.  “You can’t do it wrong.”  Clearly, this is playing to the types of people who love to find fault with standard medical practices.  They want something that is perfect, is always going to work, and has no side effects.  This, of course, is pure fantasy.

So far, it sounds like psychedelics might be useful in clinical setting, but just like any other psychiatric drugs currently used, they are not always positive and highly dependent on the individual.  The panel seems to be downplaying the side effects of the drugs they are peddling.

Next up is a case study of a woman named Estalyn who tried psilocybin for anxiety resulting from cancer that she had successfully beaten.  (To the show’s credit, they do say that “surgery and chemotherapy” were how Estalyn beat it.)  She signed up for an NYU study that used psychotherapy and psilocybin in conjunction.  “I experienced this realization … that there’s no connection – it’s the same thing – I experienced my body as my mind.”

Now, to be sure, there may be some promise in using psychedelics in clinical settings.  The ability to study this is important and the fact that the FDA has lifted some restrictions on these sorts of studies is terrific, but let’s not get ahead of ourselves.  Research into these methods is still in its infancy, and this show is going to great lengths to push these therapies as the next great thing despite there being a lot of work to do.

They’re making three grams of mushrooms into a tea.  The guru is going to take some with the visitors.  Because nothing says great clinical procedure like your counselor doing drugs right along with you.  Or, as he phrases it, “we can be with the spirit of the mushroom.”  Groovy.

Everyone drinks after clinking their coffee mugs.  Now it’s time to burn incense.  Because of course it is.

Now back to Goop.  Paltrow asks what psychedelic therapy entails.  Haden dismissively describes psychotherapy as “a discussion about the issues and maybe some suggested ways of thinking about it.”  Nice oversimplification, there, but do go on.  Psychedelics, however, “gives us access to the unconscious material.”  Siu goes on to describe it as an “empathic experience.”

Now time for another case study of an Iraq veteran using MDMA for PTSD.  Again, there is some evidence that MDMA can have some benefit in therapy, but considering the show talks about “terrible side effects” of drugs being currently used, bringing out a drug that causes several deaths a year is a bit interesting.

Now back to Jamaica where everyone is profoundly high.  One gets an uncontrollable case of the giggles.  The only thing missing is Pink Floyd music.

“I thought I was inside a tree and then I realized it was, like, in an organ and that was scary… or a birth canal.”

“Clouds have a really weird quality.  But things in here have a normal quality.  I think.”

“Is the sky crazy?  The sky right now is crazy.”

Back to Goop HQ, where Haden is stressing that he is not advocating people self-medicating.  Well, that’s good.  “What we do is completely different.”  Then we cut back to Jamaica with a bunch of people under the influence of mushrooms with no medical supervision.

Back in the Goop HQ, they talk about how terrible Western culture is, that we’re trained to hold back and suppress and avoid negative emotions.  That’s quite the generalization.  Sure, there are some aspects of culture that are like that, but they paint with quite the broad brush.  “Psychedelics are the opposite,” says Haden.  Well, thank goodness, there’s something completely the opposite of all that bad stuff you just made up!

Paltrow goes on to talk repeatedly about some vague “lack of connection” that is causing all sorts of societal problems.  “I don’t think I’ve met a healthy person yet,” responds Siu.

Back to Jamaica where the mushrooms have finally worn off and the gurus give them some last platitudes before they leave.  Haden then talks about how “we’ve just scratched the surface” of psychedelics, then talks about how he hopes that “mainstream” psychology will integrate them more.

But hang on!  That’s not at all how science works!  If we’ve only just scratched the surface, as Haden says, it is irresponsible to come to the conclusion that they are going to be an effective treatment.  You’re supposed to gather data before coming to conclusions.  It’s clear from this statement that Haden just might not be all that unbiased in his statements.

And that is really what this episode comes down to.  There may be some benefit to psychedelics, but there was an appalling credulity in the production of this episode that it painted things such as therapy, culture, and medicine with such broad brushes.  The potential negative effects of psychedelics is hardly broached, and there is zero credit given for the number of lives that have been drastically improved by current therapy and medicine.

In the end, I had been expecting the show to be a 40-minute-long commercial for Goop products, and to the show’s credit it was definitely nothing of the sort, but it did contain the same lack of scientific inquiry that has come to define Gwyneth Paltrow’s brand in recent years.

1 It is difficult to give an exact figure of how many deaths are caused by MDMA, since there are often other drugs involved, but some studies have estimated about 50 deaths per year. (https://www.ncbi.nlm.nih.gov/pubmed/19195429)